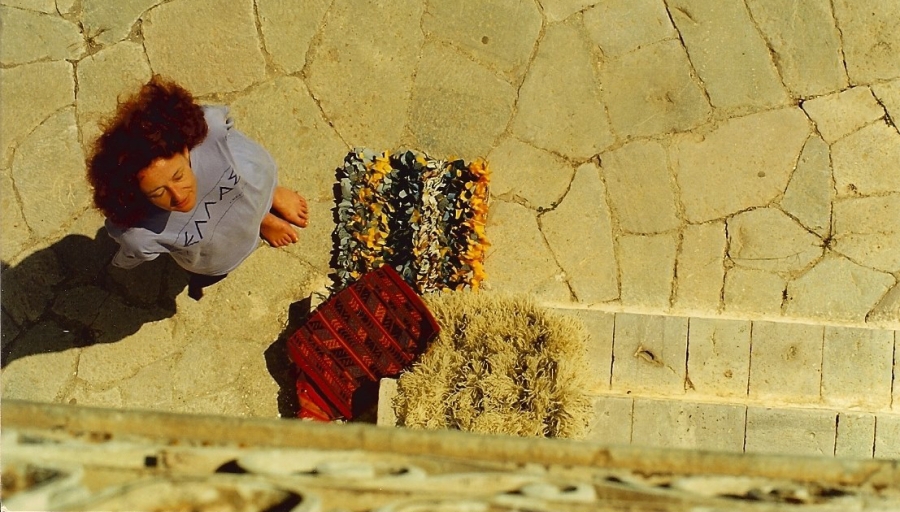 For decades, I have been fascinated by the variety of traditional weaving produced all over the world. Most techniques are the same or similar. But the results depend on the types of looms and tools available in each area, the material used for warp and weft (cotton, linen, wool), the thickness of the yarn, the breed of sheep for wool, the colour of yarn used (natural or naturally dyed by plants growing in the area). Designs and colours are very much influenced by the environment and the light of each place.

During the 1980s I organized several courses every summer to teach the traditional Greek weaving techniques to foreign weavers. My students were of all weaving levels and from all the continents in the world. They learned a lot, not only about weaving but also about Greek life. And I learned a lot about weaving from more places than I can remember. I had a great time surrounded by weavers, nice people with common interests. I think that most of them were happy, too, since quite a few came back for a second course, some for a third.

The projects woven by the students were supposed to be as “Greek” as possible. But, usually, there was a touch of the weaver’s personality, and nationality, in the combination of the designs used, of the colours, etc.

Vourjias were the traditional “back packs” on many islands. We studied the ones from Crete because they were the most colourful and decorated ones, some so fine that they were almost works of art. Most of the “foreign touches” were in the combination of colours on the striped backs of the bags.

Flokatis are non-knotted pile rugs in wool (used as bedding in the early times). They are washed in a “nerotrivi”, a whirlpool of water which felts the wool and keeps the pile in place. We used natural coloured wool.

Naxos island is famous for the very decorated fabrics used everywhere in the house. Usually in white cotton, with red and blue loom- or weaver-controlled “embroidery”. This technique is used in other parts of Greece, too.

One can find kilim (flat) weaving almost all over the world. The differences are in the combination of warp and weft (cotton-wool, all wool, etc.), the thickness of the weaving, and the design. We wove in the thick quality, as practiced in Leonidion, Peloponnese.

In Greece, there was not much knotted pile carpet weaving, in the oriental way. But 97 years ago this art-craft was brought here by the Greek refugees who managed to come over and save their lives (Destruction of Smyrna, 1922). Historically, the coast of Asia Minor (western Turkey today) was inhabited by Greeks, a lot of the antiquities still there prove it. Most of the organised workshops of pile carpet production were owned by Greeks (Sparta, Smyrna, etc.), exporting carpets mostly to Europe. So upon arrival many new workshops were set up, in Greece this time, to fulfil the orders taken in Asia Minor, carpets were woven and exported. In our courses, we used the technique of the Greek refugees (material and knots). The rugs woven by the students were small, pile carpet weaving is a very time consuming technique, including the warping of the loom.

The photos are not of all the different types of weaving done in the courses, just some of them. Hopefully, one day I will have a slide scanner and I will be able to scan decades of weaving, costume, etc. slides.