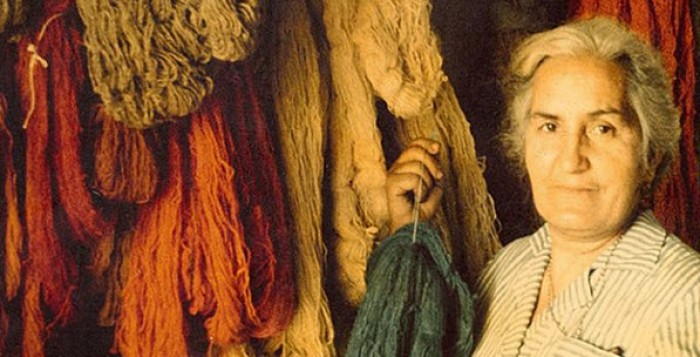 Many moons ago, in a shop full of woven colour on the island of Mykonos, I met Vienoula Kousathana (Vienoula of Mykonos). That is where I saw a traditional working loom for the first time. I had no idea then how meeting that wonderful lively older woman would affect my life.

Later on that summer another weaver showed me in detail how the loom works. Warp making seemed to be quite complicated so I forgot all about looms.

Next winter, back in Athens, I found a book called “Step-by-step Weaving” (Nell Znamierowsky), bought it and made a simple loom following the directions in it. That loom was similar to a toy I had as a child, a gift from my uncle Christos.

I taught myself how to weave, how to make a good warp, and after many books and many complex looms (up to a dobby-loom) I have returned to the simple creative techniques in that first book. The same techniques that Vienoula was using while playing with colour.

Since that meeting with Vienoula, weaving has taken me to many places and, a few decades later, it still does.

There are many photos of Vienoula, her weaving, her shop, friends and family in the following video. It is in Greek but the YouTube description in English is quite good.

The film tells the story of Vienoula, a weaver who changed the course of crafting Mykonian textiles.
Born in 1907, Viennoula traveled to England at the age of 13. The year was 1920 and she spent the next 5 years in Britain at her godmother’s side. She learned perfect English and eventually returned to Mykonos in 1925. Upon her return she took up her mother’s loom and began to weave. She married Dimitris Kousathanas (nicknamed “Baby”); they had 5 children together. After World War II ended the first tourists began to visit the island. And they met Viennoula as she was the only local who spoke English. One of these travelers was Florence Henry, the photographer for Dior. He inspired Viennoula to transform herself from employee to entrepreneur. In 1950 she opened her own shop with her own original creations. From that point on, each visitor coming to the island, without exception, ended up in a tiny shop with a sign posted on the door “English Spoken.” Inside the small room the walls are covered in shelves brimming with her handmade creations: jackets, skirts, ties, tablecloths, rugs and blankets. In front of the window stands the loom and seated behind it is a Greek woman with sparkling black eyes and neatly combed grey hair, welcoming you with a smile as warm as an embrace. Poets, writers, architects, dancers, fashion designers, musicians and artists from every corner of the earth gathered round Vienoula’s loom. In the back of the house was the kitchen. On the large table there was always a plate of food to be shared with Mykonian or tourist passer-bys. And with some of these people lifelong friendships were forged; Kostantino Doxiathi of the building society and the violinist Yehudi Menuhin were 2 of these friendships.
Vienoula revolutionized the traditional Mykonian woven textile. She experimented fearlessly, willing to try new things. She changed the plain, somber pattern and the method of the weave. But more important than everything else she changed the color of the textile; she made it brighter, colorful and charming. Vienoula was both open-minded and open-hearted. She became one of the people who was identified with Mykonos. She loved life; to dance, to sing, to share good company, to tell jokes and to pose riddles. She was smart and ambitious and without grandiose ideas about herself. And when both Greeks and tourists told her she was an artist she replied “I am simply a weaver.”
The film was directed by Andonis Theocharis Kioukas of Q-kas Productions (www.qkas.gr). It is the second in a series of films Kioukas has produced and directed during the last few years in an attempt to preserve the cultural heritage passed down by these unique Mykonian individuals, larger than life, helping the island to grow and thrive in their unique way. Kioukas says he has chosen individuals that magically transformed the island, without they themselves knowing quite how they accomplished this. The 45 minute film is made up of interviews with 4 of Vienoula’s children—Amalia, Annouso, Anna and Panyioti as well as local artisans, Karolina and Luis Orasco.

3 thoughts on “Meeting Vienoula in Mykonos and discovering weaving”